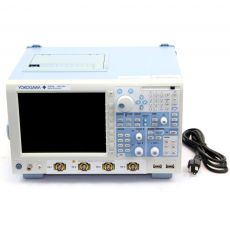 Two primary challenges in developing a MSO are correlating samples between the logic and analog inputs, and maintaining waveform update rate (minimizing dead time) as various oscilloscope functions are enabled. The DL9000 MSO models are unsurpassed in these areas. Whereas logic hardware on many MSO's are an afterthought, the DL9700/9500 is designed to always match sample rate and memory depth between the analog and logic channels. You can trust that signals are correlated, plus unrestricted 5GS/sec logic sample rate means the least amount of timing uncertainty. Unlike other vendors, the DL9000 MSO models' waveform update rate is unaffected when using logic channels.

High-Speed Display and Updating at up to 2.5 Million waveforms/s and Megawords of Data from 4 Analog + 16/32-bit Logic Inputs with the least compromise.

Note: The above rates can vary depending on the oscilloscope settings.

State display and bus display functions are typically found in logic analyzers. DL9000 Series MSO Models support these types of logic signal display and analysis functions, and helps increase efficiency in the coordinated analysis of analog and logic signals. Moreover, when performing these analysis and display functions on DL9000 Series MSO Models, the screen display update rate is not compromised.

Other oscilloscopes show you digitally persisted acquisitions in just one display layer. What if there is a signal buried within the "fuzz" you would like to separate? With the DL9000, not only can you toggle digital persistence (accumulation) on or off, Yokogawa's unique "history memory" also allows you to separate and view previously acquired data individually.

DL9000 Series MSO Models not only update the display at high speed, but also includes a function for recalling up to 2000 screens worth of past waveforms.
High-speed screen updating alone does not allow users to take full advantage of the digital oscilloscope. Rather, the ability to redisplay and analyze individual waveforms unleashes the digital oscilloscope's full potential.

+ What is a request for quotation?

A request for quotation is an enquiry regarding the price, discount, and delivery times for one or more items. Our sales department will send you a quotation via email as soon as possible.

+ I can’t find a specific item, how do I search for it?

You can send us a contact form with the information you have available about the product(s) so that our sales department can identify it and send you an offer for the product(s) requested. You can also contact us at enquiry@measureparts.com.

+ Do you offer any technical support?

Yes we do, We select proper code or soultion for you from different brands.

+ I approve of the quotation, how do I place the order?

If you agree with the quotation you receive via email, you can respond to the same email address that sent it to you to confirm the purchase. The administration department will get in touch with you as soon as possible to process the purchase.

We accept Bank transfers and the following methods of payment:
Menu
Mail Us
enquiry@measureparts.com